​"As Bards, as Druids, we are reclaimers of story.  We understand that one of the ways we can heal ourselves individually, and help to heal what we see outside of ourselves, is to remember the old stories, remember the stories of our ancestors, remember our personal story.  This healing, redemptive power of story is known of course to psychology and psychotherapy, but it's known to us too in a mystical way."
​Philip Carr-Gomm
The healing power of the Silver Branch
​
When telling stories, I often use a silver branch hung with bells to lead listeners on the journey.

The silver branch is often mentioned in Celtic mythology as something which can enable the bearer to pass into the Otherworld while still alive.  It is mentioned in The Voyage of Bran, and is also used by Manannan Mac Lir to entice Cormac Mac Airt to visit the Otherworld.  In this tale, the branch originally enchants Cormac into making an unwise bargain.  However, after he has become wise, the branch becomes a tool for healing and delight.

It is the same with story.   Immersing oneself fully in fantasy, for the purposes of escapism, can be damaging if it leads us to neglect the important things in life.  However,  the best stories teach us lessons about our priorities in life even as they entertain us: they take us out of ourselves, and we are wiser when we return.

​​Yeats used the image of the branch (though he made it green not silver) as a foreword to a book of tales:

When Philip invited me to do an episode of Tea with a Druid, I decided not to copy him by doing a meditation, but to tell a story instead.
​
​The Story Cycles of Ireland
​
The Irish stories have survived, at least partly, thanks to the medieval monks who recorded them in writing.   Although they were Christians, they prized the old myths too highly to let them fade away.  However,  their retellings are clearly filtered through their own religious sensibilities, and do not give us details about the religious practices of ancient Ireland.

The texts we have can be divided into four cycles:

The Mythological cycle:
The Ulster cycle:
The Fenian cycle:
The King cycle:
​
There are also the Echtrae (adventures in the Otherworld) and the Immrama (voyages).

There are those who insist that old tales should only be read in the original old Irish and told nearly word perfect, to keep them pure.   There are others, including the authors of many websites, who feel free to play fast and loose with the stories, treating them with little love or care.

In my storytelling, I do not follow the medieval texts word for word.  I believe in keeping the stories fresh, and examining them from different perspectives, while still staying faithful to the events portrayed.  I particularly enjoy telling the tales from the point of view of the female characters,.  Thus, I will sometimes tell the tale of Mad Sweeney from the perspective of his wife, or The Children of Lir from Aoife's point of view.   Such is the depth and richness of the Irish stories that they continually yield fresh insights when examined in this way.
​ 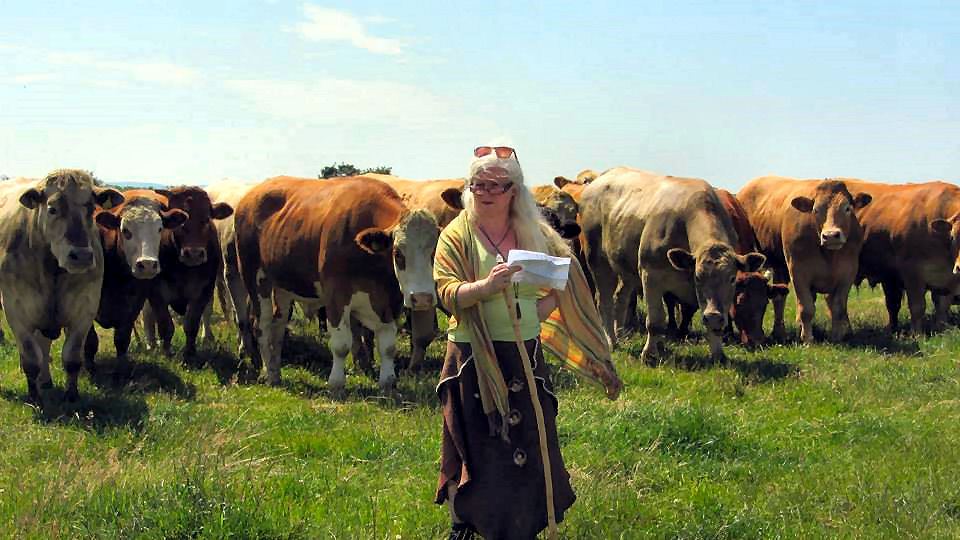 As Cuchulainn, addressing Brighid during the Brighid's Way pilgrimage. I promise there were people there as well as cows!